"And finally, above all else, it is about leaving a mark that I existed: I was here. I was hungry. I was defeated. I was happy. I was sad. I was in love. I was afraid. I was hopeful. I had an idea and I had a good purpose and that’s why I made works of art…" – Felix Gonzalez-Torres

(There. All bases covered!)

What I’m looking forward to in:

1 minute: Starting season 1 of “Breaking Bad” (the boy said I have to watch it)

1 hour: Hopefully, nite-nite time. I am not getting anywhere near enough sleep lately.

1 day: Going to the Apple store, then lunch at Sarussi’s, with the boy

1 month: The boy’s birthday outing to the Keys (technically it’s less than a month, but close enough)

1 year: Fingers crossed we’ll be in Washington, in our own place and enjoying quiet, country living

Your weakness: red velvet cupcakes, scrap supplies, and the boy

Your fear: heights, flying, clowns, getting stabbed, anything reptilian or amphibious

Your Perfect Pizza: Hawaiian with bacon

Chocolate or Vanilla: neither

Do you sing: yes, in the car

Do you play an instrument: No

In the past month have you eaten a box of Oreos: Not a big fan of Oreos

What country would you like most to visit: Ireland

Number of CD’s I own: Way too many to count

One of the things I love about the internet is learning about things I wouldn’t have known otherwise. I have learned about new restaurants, cool websites and online shops just from reading other people’s blogs and perusing Pinterest and Tumblr. One blog that I read regularly is Nora Griffin’s “Just Make Stuff.” It’s a super-cute blog full of great crafting ideas, personal stories and links to other inspiring and creative sites. Last month Nora featured a site called 31Bits, which immediately caught my interest.

31Bits is a company that sells jewelry handmade by women in Gulu, Uganda. It was started in 2007 by Kallie Dovel as a way to help the women overcome poverty by helping them sell their handcrafted jewelry. From their site:

Kallie Dovel, traveled to Uganda in the summer of 2007, getting a first-hand look at life in Northern Uganda. While she was there, she met women making paper beads but who lacked a plan to market and sell them. After spending time in their homes and hearing their stories, Kallie knew there had to be a way to give opportunities to her new friends. She brought a box of jewelry back to the U.S., and spent the next year finishing her degree and dreaming up the concept of a development organization. She brought a few friends on board and her ideas quickly evolved into 31 Bits. The girls traveled back to Uganda in August 2008, and selected six women to begin buying jewelry from on a monthly basis. Since then, we have grown to 99 women; each with a unique story of suffering that has been overcome with joy and liberation.

31Bits currently works with over 60 women in Gulu, empowering them to rise above poverty. The company purchases jewelry from each woman on a monthly basis, providing them with a consistent income. In addition, they also provide English lessons, finance training, AIDS and health education, vocational training, and a community group dedicated to giving the women counseling and leadership,

The jewelry is handmade using 100% recycled paper and other local materials. The pieces are really beautiful and Nora Griffin hosted a giveaway on her site where a commenter would be picked at random to win one of the bracelets.

YEP! Winner winner, chicken dinner! That would be me. So I received this gorgeous colorful bracelet from Nora.

Believe it or not, those beautiful beads are all made of recycled paper! I know, right??

Anyway, I was so inspired by 31 Bits’ mission statement that I ordered a few bracelets. They arrived just a few short days later and I am really pleased with them. I ordered several colors of the same style so that I could mix and match them with different outfits. They arrived packaged in a handsewn, fabric pouch, which I love. I can’t wait to start wearing them all the time. =)

They have many different styles and gorgeous necklaces also. I encourage you to check out their site and maybe you’ll find something special for yourself or a loved one, and you can help out some deserving women in the process.

You get a new meme! (I know, but please, try to contain your excitement.)

B. Bed size: Queen.
C. Chore that you hate: Cleaning the bathroom.
D. Dogs: No pets currently, but we really want to get a puppy once we settle into our own place in WA. Fanless wants a St. Bernard; I want a Shiba Inu or American Eskimo. We’ll see what happens.
E. Essential start to your day: Coffee. Always coffee.
F. Favorite color: Black. I know, boring.
G. Gold or Silver: Preferably silver.
H. Height: 5’6", although for the majority of my life I could have sworn I was 5’7”.
I. Instruments you play: Ah, this is a good one. In high school I took a keyboard class as an elective. But I am completely tone-deaf. So the only things I actually learned to play were the “dun dun dun, dun dun dun…” from the theme song for “Halloween” and the intro to Motley Crue’s “Home Sweet Home.”
J. Job title: Oh lord, it’s such a made-up title it’s not even funny: Content Quality Specialist. It does not describe what I actually do in any way, shape or form.
K. Kids: None.
L. Live: Miami, FL
M. Mother’s name: Der… it’s Mom! (Seriously, my mom’s name is rather unique and I’d rather not share that info here for privacy reasons.)
N. Nicknames: Lou, Lulu, Balou, Balulu, lady, devil woman
O. Overnight hospital stays: I’ve had three extended hospital stays, all for different surgeries.
P. Pet peeves: This is a very, VERY long list. At the top, though? Rude people, bad drivers (gee, you think those two stem from living in South Florida??), people who don’t know the difference between ‘your’ and ‘you’re’, and people who spell ‘ridiculous’ with an E (rediculous).
Q. Quote from a movie: “Wayne! I think we’ve established that "Ca-caw, ca-caw" and "Tookie, tookie" don’t work” (from Evolution. I love that movie.)
R. Right or left handed: Right handed.
S. Siblings: Yes, one older sister.
U. Underwear: Yes.
V. Vegetable you hate: Cucumber. Blecccchhhh!
W. What makes you run late: Traffic. My hair.
X. X-Rays you’ve had: All kinds. Chest, abdomen, leg and foot (broke my foot in the 5th grade), ankle (another childhood injury; luckily it was just a sprain), MRI, mammogram, dental. I think that’s it.
Y. Yummy food that you make: I think I make a really killer lasagna.
Z. Zoo animal: Oh, I love penguins! And little monkeys, like squirrel monkeys.

If so, I really need it to take me away.

I finally got the chance to take my car to the mechanic yesterday (after having to call roadside assistance for a jump start… again) to replace the dead battery. I figured as long as I was there I might as well ask them to replace my wiper blades which were splitting. Apparently, the guy at the service counter also went ahead and ordered a 7-point inspection for me, because I came to find out that in addition to my dead battery I also had four bald tires, one of the rear tires was coming loose from the axel, and my front brake pads were completely worn down to almost nothing.

So five hours and $775 later… everything got replaced. Including the stupid battery. And now I feel like I need to take a road trip just to justify all this BS. But, of course, now there is no money for that.

My birthday was yesterday and it was certainly one I won’t easily forget. No, not an epic, party-filled, whirlwind of fun. Please allow me to recap my “Murphy’s Law” birthday weekend for you…

On Friday night I accidentally sliced my finger open (again) with the blade part of my Martha Stewart Circle Cutter. This thing: 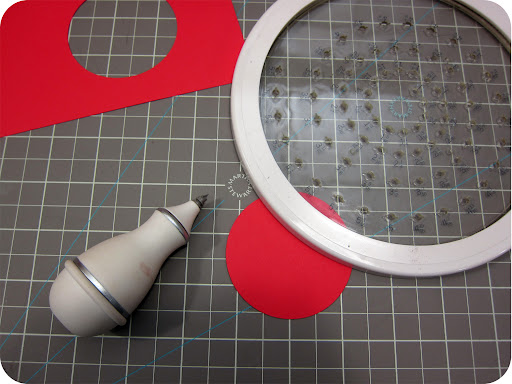 See that teeny little blade in the handle part (on the left?) Yeah, THAT! That little effer is SHARP!! Hurt like a bitch and bled like crazy, too.

Saturday morning I headed over to the beach to stay at Fanless’, as usual. On the way over I stopped at Target to pick up a few things and discovered, while in the check out line, that I didn’t have my ATM/Debit card. No problem, I thought; it’s probably in the car. Umm… it was so NOT in the car. I checked under the seats and floor mats, took everything out of my wallet and purse. Not there either. So then I had to call Bank of America to cancel it and request a new one, and was informed it would take at least a week. However, the agent I spoke to did wish me a happy birthday. So that was nice.

On Sunday we had planned to go see “Transformers: Dark of the Moon” (which I keep mistakenly calling “Bark at the Moon”; too much Ozzy, I guess) at the IMAX 3D in Aventura Mall. Turns out the new Harry Potter movie displaced Transformers so it’s no longer showing at the IMAX. We decided to just stay in and relax, which was fine with me. We ended up ordering pizza and Fanless bought me a slice of chocolate cake from the Argentine restaurant across the street.

The photo cracks me up. Fanless took the picture and I immediately sent it to my cousin, Jose. (The joke in my family is that when we were kids every single birthday party picture has me and my cousins standing behind the table with the cake as the centerpiece, a tray of bocaditos and a bottle of Pepsi. See below for evidence.)

I couldn’t even tell you whose birthday party that was because ALL of our pictures were like that.

Anyway, I usually leave the beach immediately following The Glades, which ends at 11pm. Last night we decided to watch Falling Skies as well, but Fanless’ mom called to wish me a happy birthday and we ended up chatting with her for quite a while. By the time we finished the show it was 1AM. I gathered my stuff and walked down to my car and… it wouldn’t start. Like, at all.

So I marched myself back to Fanless’ apartment and called Geico’s roadside assistance to request a jump start. They advised it would be about 40 minutes. Over an hour later, the guy from the tow company called to let me know that the driver originally headed my way got a flat tire (irony?) so they were sending someone else. The dude finally showed up at about 2:45AM. By the time I got home it was 3:30AM. And then I found someone parked in my assigned spot, so I had to park in someone else’s space. In the middle of writing a note of explanation to leave on my dashboard for the rightful owner of the spot I had pilfered, my car died again.

Now. If that isn’t a Murphy’s Law birthday weekend, I don’t know what is. =)

But… It wasn’t all bad. My honey got me some beautiful jewelry for my gifts. This gorgeous, vintage-looking amber ring:

So that was my exciting birthday weekend. I think I’m done celebrating now.

Next Page »
Searching for Normalcy
Create a free website or blog at WordPress.com.